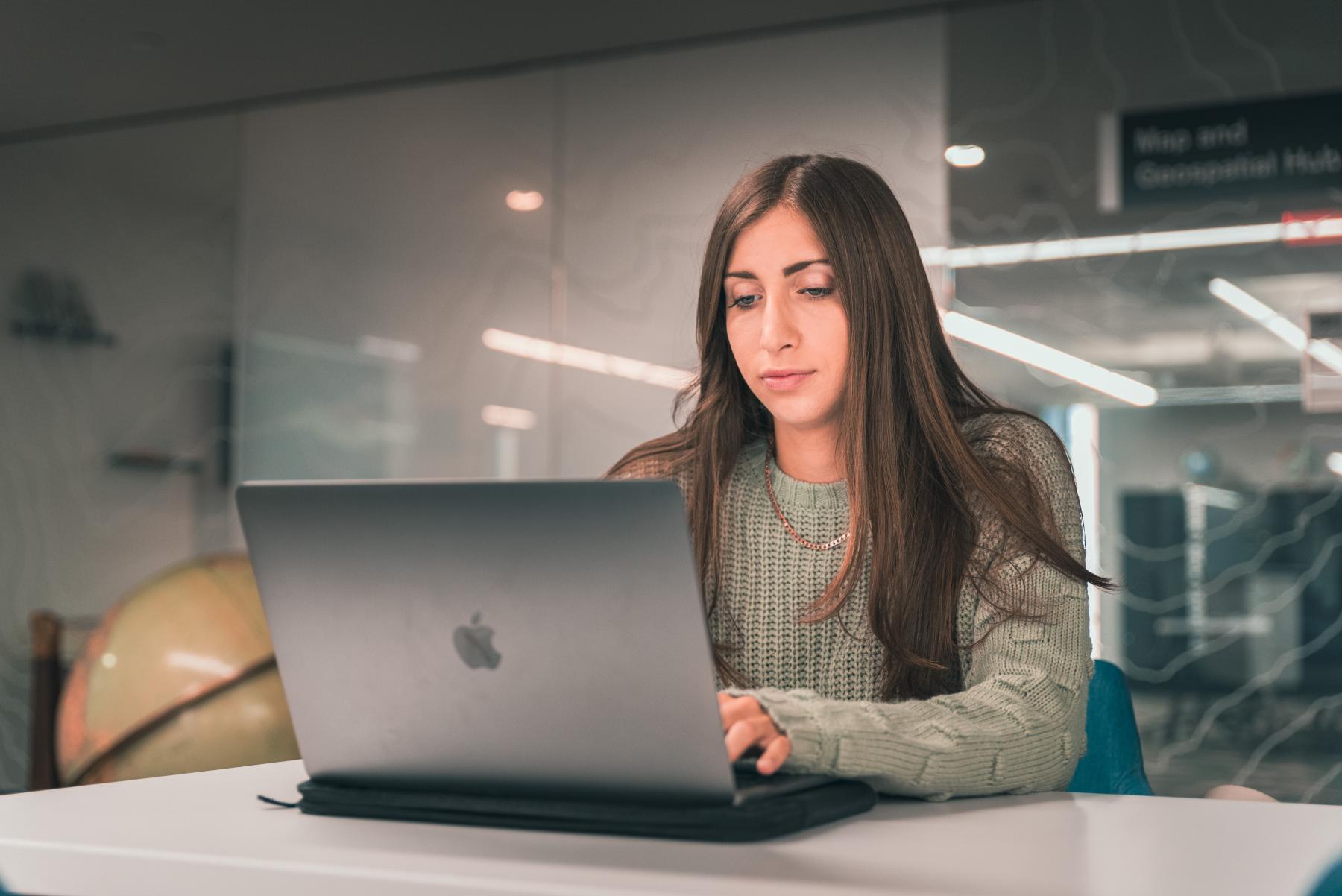 Journalism students are working to create and code their own apps

The need for tech-savvy employees across industries is expected to increase 15% by 2031, much faster than the average rate of employment for all U.S. occupations.

For ASU students entering the workforce, learning fundamental coding principles could help separate them from the competition. Better yet, knowing how to build an app from start to finish could help students and graduates get hired.

Now, Sun Devils across disciplines are taking advantage of university coding resources to build their tech portfolios. The opportunity is supported through a partnership with ASU Enterprise Technology and Apple to bring coding resources to colleges across the campus.

Students with the New Media Innovation and Entrepreneurship Lab (NMIEL) are embracing these emerging technologies and developing in-demand coding skills before entering their first jobs.

Talia Massi, a senior majoring in sports journalism at the Walter Cronkite School of Journalism and Mass Communication, had only taken an entry-level coding class her freshman year. Fast forward to her senior year, and she’s a semifinalist in the Fall 2022 Venture Devils Demo Day in December building a complete app to pitch for the chance to earn nearly $200,000 in funding and support.

“At first, coding seemed very intimidating because I thought if you put a period in the wrong place, then the whole thing would be wrong and it wouldn’t run properly,” said Massi. “But it's been a lot easier than I thought it would be.”

Massi, who is also the team manager of the ASU women’s lacrosse team, wants to help college athletes build their professional profiles while attending classes. Inspired by the rise of social platforms, such as Linkedin, she plans to build a user-friendly, professional networking app focused on strengthening organic relationships between athletes and brands.

Following Demo Day, she will present her app, “VA(NIL)LA”, to a committee at Barrett, The Honors College, as her final thesis/creative project in March of 2023.

With guidance from Enterprise Technology’s Swift Champion Khang Nguyen, and mentors with the NMIEL, her app is coming alive.

“The Apple Swift Playground allows you to think outside the box and create prototypes as soon as you have an idea,” said Nguyen, a senior majoring in computer science at Ira A. Fulton Schools of Engineering. In the role of a Swift Champion, Nguyen works directly with students to develop their apps. “You don’t need comprehensive computer skills to build an app anymore — that really opens up creative opportunities.”

Retha Hill, director of NMIEL at the Walter Cronkite School of Journalism and Mass Communication, has led a charge since 2007 to introduce journalism students to emerging technologies to enhance digital communication.

“When you look ahead to augmented reality, virtual reality and the metaverse, or talk about how to engage people younger than 30 with news — that's where certain apps or news games come into play,” said Hill.

In addition to app development, students with NMIEL have created more than 50 digital games, collectively earned more than $150,000 in start-up funding, and have won prestigious national journalism awards.

“You can shoot and edit your own videos, photographs or build things that used to take a specialist to do — by yourself,” said Hill, who is also the chair of Massi’s Barrett Honors committee — a group appointed to collaborate, mentor and evaluate her final project. “Being able to build an app using programs, like Apple Swift Playgrounds, puts you in a powerful position when you're looking for a job because your employer is not only getting a journalist – maybe someone who has broadcast or writing skills – but they're also getting someone who can build an app.”

As companies blur the lines between physical and digital spaces, this integrated process of developing technical skills across the education spectrum may be key to student success long after their ASU experience.

“It's been really fun,” said Massi. “And the coding and entrepreneurial experience is exactly what I wanted to take away from my creative project for Barrett. It's checked all the boxes so far.”

In addition to teaching the NMIEL, Hill is set to launch Immersive Media Storytelling at Cronkite in the Spring of 2023, a class focused on extended reality and app development with modules using the Swift Community Playground.

This initiative is supported by ASU Enterprise Technology, in collaboration with Apple’s Community Education Initiative, which partners with institutions to create opportunities for learners of all backgrounds to gain skills in coding.